TOGETHER AGAIN: THE CHEESE CEREMONY RETURNS 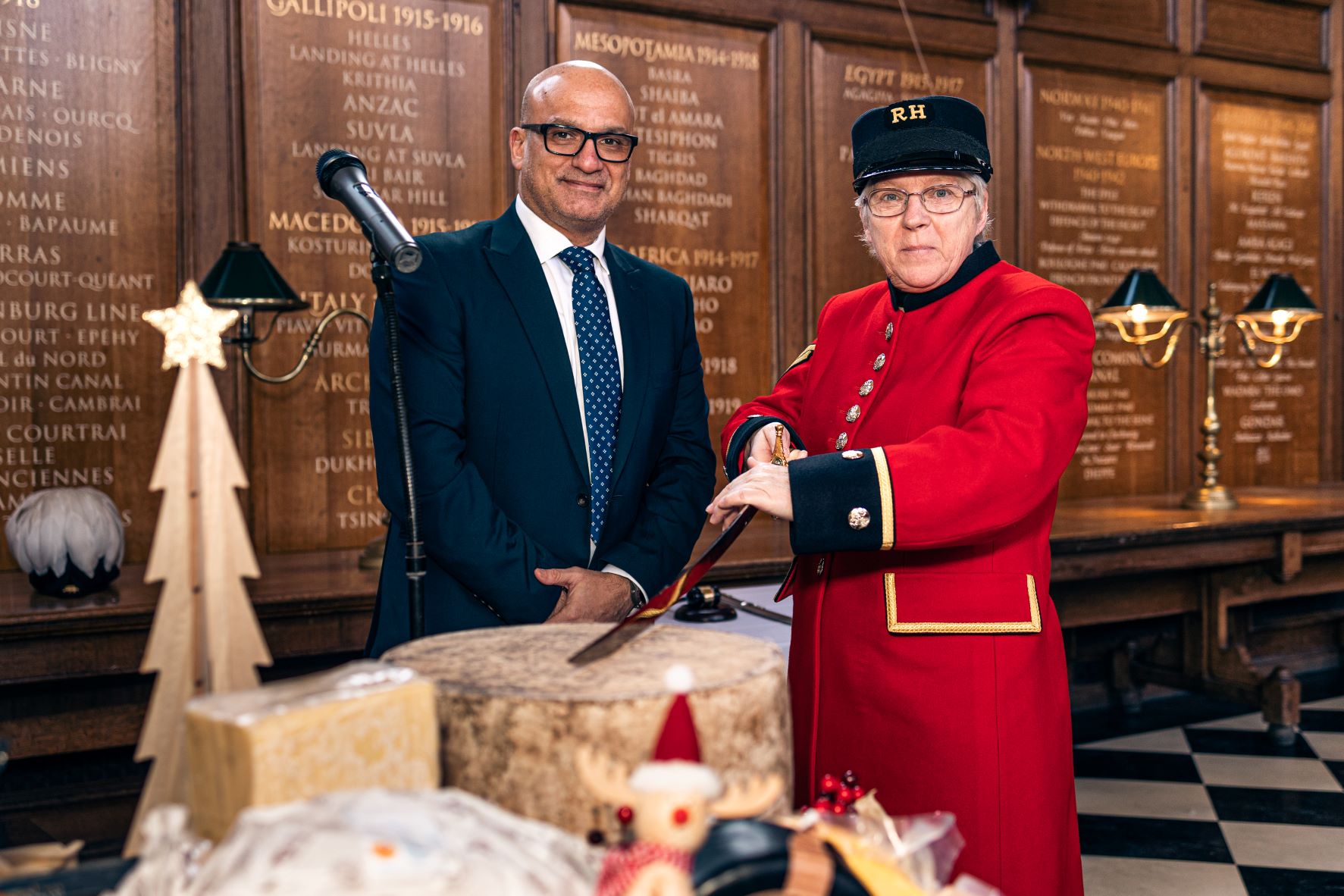 6th December 2021 – The historic Ceremony of the Christmas Cheeses returned as a physical event with industry guests and Chelsea Pensioners reunited this year at the Royal Hospital Chelsea.

The Ceremony of the Christmas Cheeses returned on Friday last week as a physical event this year for its 62nd year running, with Chelsea Pensioners and cheesemakers reunited, following pandemic restrictions last year which prevented the ceremony going ahead as usual.

In a Covid-safe Ceremony, the Chelsea Pensioners were joined by cheesemakers and industry representatives to kick-start this year’s festive season and celebrate the time-honoured tradition of cheese donations to the Royal Hospital Chelsea.

The history of cheesemakers donating cheeses to the Royal Hospital dates back to the opening of the Royal Hospital when Sir Christopher Wren asked local cheesemongers to donate cheese to the Pensioners the year the hospital opened – 1692. After that, local cheese makers continued making ad hoc donations and sixty-two years ago, this became an officially organised event.

This year cheesemakers donated a huge 286kgs (630lbs) of cheese to the Royal Hospital as part of the Ceremony, continuing the time-honoured tradition of British cheesemakers recognising the service of the men and women of the Royal Hospital to this country. The celebrations would not have been complete without some fine vintage ale which was donated by Asahi UK and Fuller’s Griffin Brewery who support the event every year.

Cutting this year’s Ceremonial Cheese – a 24kg Montgomery Cheddar – was Chelsea Pensioner Carol Knight. Commenting on the Ceremony, Knight said: “It’s quite an honour, I’m very much looking forward to it. I hadn’t heard about the ceremony before I came to the Hospital. It’s a real honour to be involved.”

Knight first enlisted and was badged to the Women’s Royal Army Corps in 1971 where she trained as an Army Driver and she was subsequently employed to provide driving instruction to junior soldiers. Her service was split between postings within the UK and to Germany. When she was discharged, Carol had reached the rank of Corporal. Some years later, Carol enlisted into the Territorial Army.

Dairy UK Chair Ash Amirahmadi told guests and Chelsea Pensioners: “Our focus over the last eighteen months has been fulfilling our responsibility as a food sector and making sure the British public had the food that they needed on shelf when they needed it – in lockdown and out of lockdown. We’re very proud that we made that happen. But we were also committed to continuing to support the Chelsea Pensioners and although we weren’t able to physically be at the Royal Hospital last year, British cheesemakers still donated the finest British cheeses in the land for the Chelsea Pensioners of the Royal Hospital to enjoy. Although our 2021 festivities will have many precautionary measures, we are at least back with our friends at the Royal Hospital.

“It is such an honour for the industry to be a part of this historic event, and to give something back to those brave men and women who have contributed so much to our country. We hope that next year will see us return to full festivities with the Royal Hospital and the Chelsea Pensioners.”

Editors Note: The Ceremony of the Christmas Cheeses took place under strict Covid restrictive measures at the Royal Hospital Chelsea to ensure maximum safety of the Chelsea Pensioners. All guests and staff were required to show a negative lateral flow test, to wear masks wherever possible and to maintain distancing.