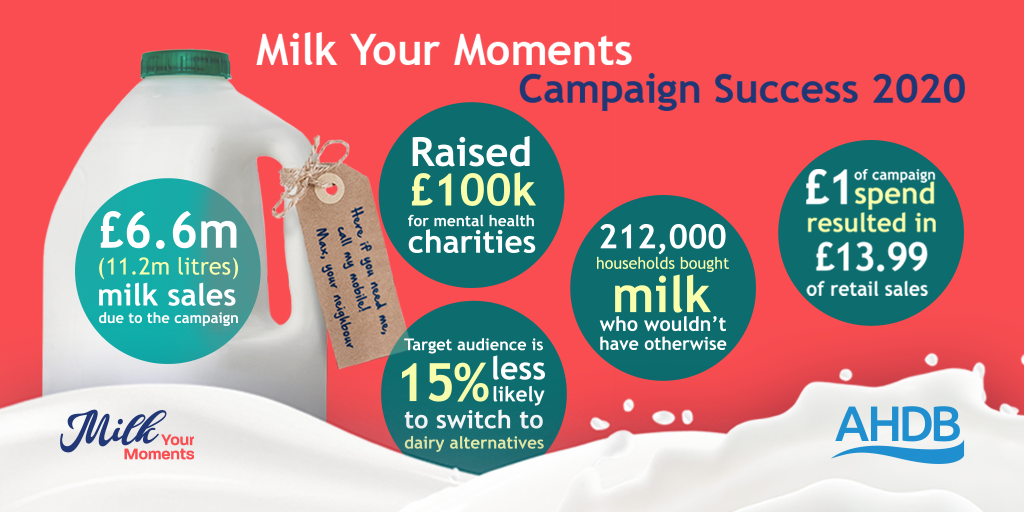 The UK-wide ‘Milk Your Moments’ campaign, which ran for 12 weeks from mid-May, resulted in an additional 212,000 consumers buying milk who would not otherwise have purchased it. This was against a challenging background of millk already being bought by 98% of UK households prior to the pandemic.

The campaign resulted in positive shifts in attitudes towards dairy within the target audience, with more consumers claiming that dairy was an important part of their diet and perfect for a growing family.

Funded with £1 million from AHDB, Dairy UK, dairy processors, Defra, Scottish, Welsh and Northern Ireland Governments, the campaign aimed to address the drop in liquid milk demand caused by the closure of foodservice outlets due to Coronavirus.

Working with Dairy UK, processors helped to bring multiple retailers on board with the campaign and drove additional engagement on social media through dairy brands and industry organisations.

Dr Judith Bryans, Chief Executive of Dairy UK said: “Everyone involved in the development and funding of this campaign went into it with a very positive mindset, wanting to connect with our consumers and reassure them that dairy has always been with them and would continue to be with them through this crisis. The uplift in sales that was achieved and the positive behaviour changes evidenced by the results reflect the fact that the campaign’s messages resonated with consumers.”

Paul Flanagan, AHDB Dairy Strategy Director: said: “The campaign was a brilliant example of the industry pulling together during a crisis with fantastic results. Every £1 spent on media, turned into £13.99 of retail sales .

“It shows just how much can be achieved when the industry and government is all pulling in the same direction with a hard-hitting campaign which struck a chord with consumers in very uncertain times.”

Milk Your Moments was created to inspire moments of connection as people were forced to stay apart due to coronavirus. It highlighted the role fresh milk and dairy plays during difficult times, with people encouraged to visit the campaign website to receive a ‘inspirational moment of connection’ to share on social media with £1 donated to mental health charities Mind, SAMH and Inspire. £100,000 was raised overall.

Consisting of social media, website, billboards outside supermarkets and, for the first time in 20 years, television advertising, the campaign contributed £6.6 million of milk sales, equivalent to 11.2 million litres, to the overall uplift.

Milk Your Moments also targeted a shift consumer attitudes to build the industry’s reputation and build upon work by AHDB and Dairy UK over the previous four years with the Department for Dairy Related Scrumptious Affairs.