BLESSED BE THE CHEESEMAKERS: 60 YEARS OF THE CHEESE CEREMONY 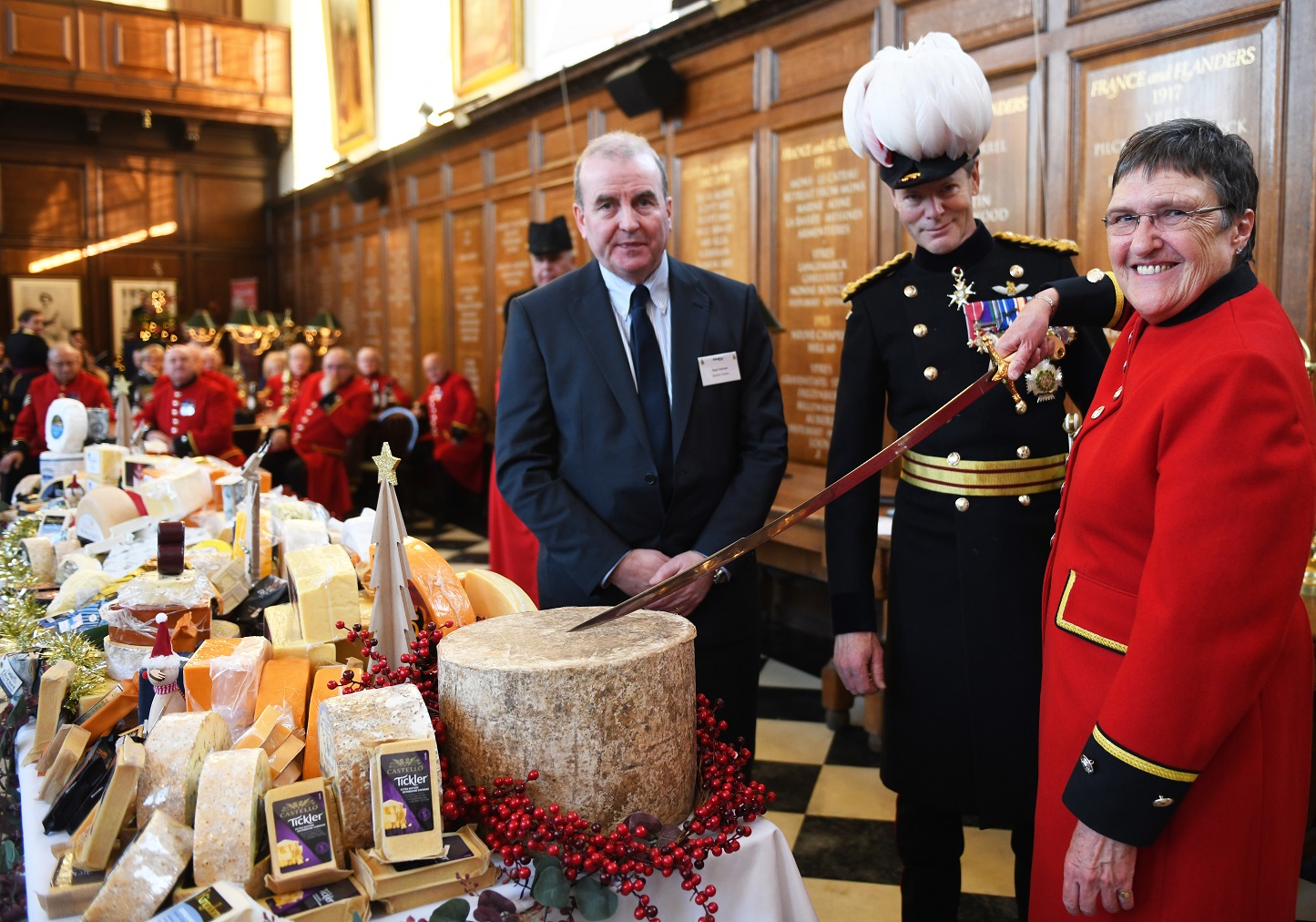 London, 4th December 2019 – Today Dairy UK and the Chelsea Pensioners celebrated the 60th year of the Annual Ceremony of the Christmas Cheeses, kicking off the Christmas festivities for 2019.

The Annual Ceremony of the Christmas Cheeses took place today at the Royal Hospital, Chelsea. This year saw generous donations from cheesemakers topping 268kg, consisting of cheeses from across the UK and including the ceremonial Montgomery cheddar weighing 25 kilos.

This year’s ceremony marked another key anniversary, with 2019 being the 75th anniversary of the D-Day landings, providing a reminder of the massive human sacrifice made by our veterans in the name of freedom.

Speaking at the ceremony, Dairy UK Chair Paul Vernon highlighted the enduring love British consumers have for cheese with 92% of consumers purchasing it on a regular basis. Mr Vernon also highlighted the unique and historic role of cheese within British society, with Cheshire cheese mentioned in the Domesday Book; used from Roman times to feed marching armies; and the role ‘Government Cheese’ played in feeding the population throughout the war.

Cutting the ceremonial Montgomery Cheddar, donated by J A E Montgomery, was Chelsea Pensioner Monica Parrott, marking another timely anniversary of ten years since the first female Pensioner was admitted to the Royal Hospital.

Monica joined the Women’s Royal Army Corps in 1964 and serving over five years in the Army, before reaching the rank of Sergeant. After leaving the Army Monica continued to give back to the community, becoming a Mental Health Nurse, caring for individuals in the community until her retirement in 2001, and becoming a Chelsea Pensioner in 2017.

Commenting, Monica said: “It’s a privilege to be asked to cut the cheese at this year’s ceremony. It is so kind that Dairy UK and all of the UK cheesemongers continue this tradition, and the Chelsea Pensioners will be sure to enjoy these incredible cheeses for as long as they last.”

Dairy UK Chair Paul Vernon added: “It’s an honour to be here at the Royal Hospital, celebrating the sixtieth year of the Cheese Ceremony. The generous donations from our cheesemakers given gladly are just a small token of the thanks we give to our brave veterans.”

Entertaining the guests this year was the Knightsbridge School Senior Choir, with a selection of Christmas classics.